We all want to walk the dog now. It’s the most valid reason to be outside.

We struggled to keep our routines for as long as possible. I am still exercising and sticking to my work schedule. Some people order out more, and others are sleeping more.

Because information is so free-flowing, it’s up to us to pump the breaks on exactly how much dread we are going to consume.

I walk the dog, and hardly anyone else is outside. Some joggers. Just two days ago, I saw a group of men playing basketball at the park, and I audibly gasped.

I can exercise outside without being catcalled, without guys staring at me.

Strangely, there are some silver linings to this social distancing.

I know three people who probably have it, and three who definitely do. The three who were tested were only tested because they were hospitalized. The ones who have not been tested called their doctors and were told to stay at home unless their symptoms worsen.

My friend describes the feeling as lasting over a week already. She gets better, worse, then better again. It seems to come in waves.

My friends who are doctors and nurses say it’s not of matter of if they get sick, but a matter of when. There are not enough masks. They are not wearing enough protective gear.

Relatives who are in New York want to leave. They don’t seem to understand the incubation period. I beg them to stay or, at the very least, to isolate themselves for two weeks when they arrive at their destination. I don’t know if they’re going to listen. That’s how it spreads.

We dance inside. My dance teachers scramble to create online classes. I see all the event invites. Suddenly, everything has shifted. People who were employed last week with steady jobs are now signing up to deliver food as a source of income. Large tips and people saying things like “Thank you for your service” for a burrito delivery have become the new normal. My roommate throws $20 into the tip jar of her local coffee house. When we pay, the employees disinfect the counters. Only one person is allowed in at a time. The rest wait outside.

When we see someone coming, we cross the street. We smile as we do so, so we know it’s not offensive…it’s just a precaution. No one takes offense. There’s an unspoken bond.

There are flyers around Greenpoint asking for volunteers and offering help to the elderly. Dogs need to be walked, groceries delivered. We are all helpless and trying to help at the same time.

I record myself belly dancing and receive a record number of views. Exes are coming back from the dead like zombies.

Life continues…it’s not the end of the world, and it’s not the same as before. It’s so hard to predict. It will become a new, third thing…where we keep our distance, stay at home, learn online, navigate a new economy.

And we’re there for each other as much as we can be.

A writer who is a mix of dark humor and hope. I aspire to hold paradox well. Currently in Greenpoint, Brooklyn. Tip if you feel generous.

Please be mindful of what you say. There’s a real person on the other side reading your message. 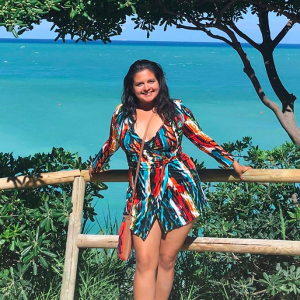 A writer who is a mix of dark humor and hope. I aspire to hold paradox well. Currently in Greenpoint, Brooklyn. Tip if you feel generous.

The Coronavirus is affecting people, businesses, communities, the financial system, and the world as we know it. The Coronavirus Network (CVN) delivers meaningful content focusing on how all of our lives are changing as this incredible pandemic evolves.

How Minority Healthcare Workers are Responding to COVID-19

Three Steps to Rebuild Your Workout Routine During the Coronavirus

Nine Self-Care Habits to Deal with Coronavirus Stress and Anxiety

Is There a Vaccine for Crazy?

Who Is That Masked Man?

What to Do if you Run Out of Formula during Quarantine

Want to contribute a story?

Join our growing ranks of Contributors, Ambassadors, and content-generating superheroes.

Apply to become an Ambassador!

The City So Nice
They Named It Twice

How Minority Healthcare Workers are Responding to COVID-19

Three Steps to Rebuild Your Workout Routine During the Coronavirus

Nine Self-Care Habits to Deal with Coronavirus Stress and Anxiety